Got a bit behind as Internet access was poor at last two stops. Well, to be more honest I was tired after this walk and I spent the following evening in the pub where there was no WiFi but excellent food.

Today I broke the rule of no more than 20 miles.Yesterday, I was meant to end at Lifton but the hotel cancelled so I stopped in Launceston. In fact, the walking was easy and I covered the distance without too much problem.

Most of the day was spent following the Two Castles trail that runs from Launceston to Okehampton. In view of the distance, I took some short cuts along roads when the trail tended to meander.Unfortunately, the trail leaflet was out of print so there will be a lack of background information.

I set off in rain dropping off the hill to follow field paths with good views back to Launceston. 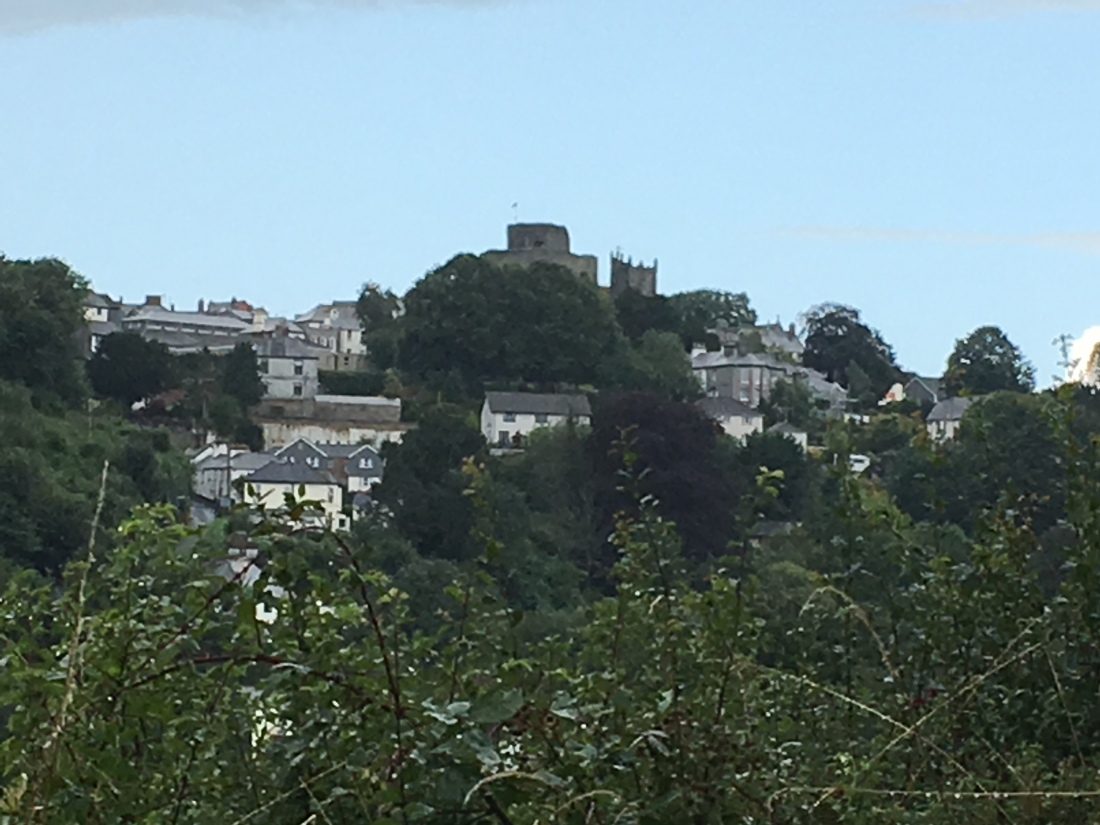 I reached a road bridge over the river Tamar, which marks the border between Devon and Cornwall.

The trail uses a combination of footpaths and minor roads. Finding the paths with a 1:50000 map was not as straightforward as with the 1:25000 as the field boundaries are not included. However, I would have needed double the number of maps ( involving more cost, weight and storage space) so I persevered even though it involved a bit of backtracking.

Progress was quick and I was soon in Lifton. There were views over the Devon countryside, rolling hills and fields with more arable crops than Cornwall. There were views back to Bodmin Moor and Dartmoor could be seen on the horizon ahead, although it was a bit misty with low cloud. Cattle with impressive horns were in evidence, but they hadn’t read or seen Game of Thrones as they were content to chew the cud rather than”stick them with the pointy end.”

The Trail detours north along footpaths but I kept to the road. This saved time but the walk was a bit tedious. The road was busy (despite being unclassified) with a constant uphill incline. I consoled myself as there were 2 pubs marked on the map but disaster! Both were closed.

Gripe of the day. Why do car drivers chuck litter out of the window? Cans and coffee cups don’t biodegrade. Why can’t they keep them in the car till they reach their destination?

I continued to the hamlet of Lewtrenchard. Sabine Baring-Gould was born here, the son of a wealthy landowner. He became a curate in Yorkshire and wrote the lyrics of “Onward Christian Soldiers” as a processional hymn for children. On the death of his father he returned Sto Lewtrenchard. He re-designed and rebuilt the Manor and restored the church. He was a polymath. He was an important folk song collector and he wrote other hymns. He translated carols and wrote many books, both fiction and non-fiction, on a variety of subjects. He organised archaeological excavations on Dartmoor.

In between all this he married and fathered 15 children.

He collaborated with Cecil Sharp to publish “English folk songs for schools” which was used until the mid 1960s; they had to change some of the bawdy lines!

I continued through very pleasant woodland. I arrived in Bridestowe gasping for a pint but the pub was closed (opened at 6). I continued to Sourton where the Highwayman was also shunt in the afternoons. A pity, both the pub and the landlady sound like they are really eccentric. The pub certainly looks strange, the entrance looks like the side of a stage coach.

I then dropped down to Betty Cottle’s Inn where I spent the night. This is an isolated pub but well worth a visit. Betty was the landlord until 25 years ago and her ghost is said to haunt the pub. After a well deserved steak and a couple of pints I was ready for bed and I suspect even if Betty had screamed in my ear I would not have stirred.