So, after my lazy afternoon on the beach I went straight to the B & B instead of visiting the promontory called Towan’s Head. This morning, it would have added 2 miles on to a long day to go back so I missed seeing the “huer’s hut”. This is said to date back to the 14th century and was used by a lookout to alert fishermen to the presence of shoals of fish.

Instead I headed out of town on the cliff road. This passes the Barrow field, containing the remains of 15 Bronze Age burial sites

I was wearing my sunglasses which are not varifocal. I read a map label as “Lusty Gaze.” What is this? Was it a nudist beach for voyeurs? A local glamour model?? In fact, it is “Lusty Glaze” and was the Sunday Times beach of the year a few years ago. I don’t know how it got it’s name. It is usually open to the public but you can hire it. A couple were getting married today, they had picked fine weather. 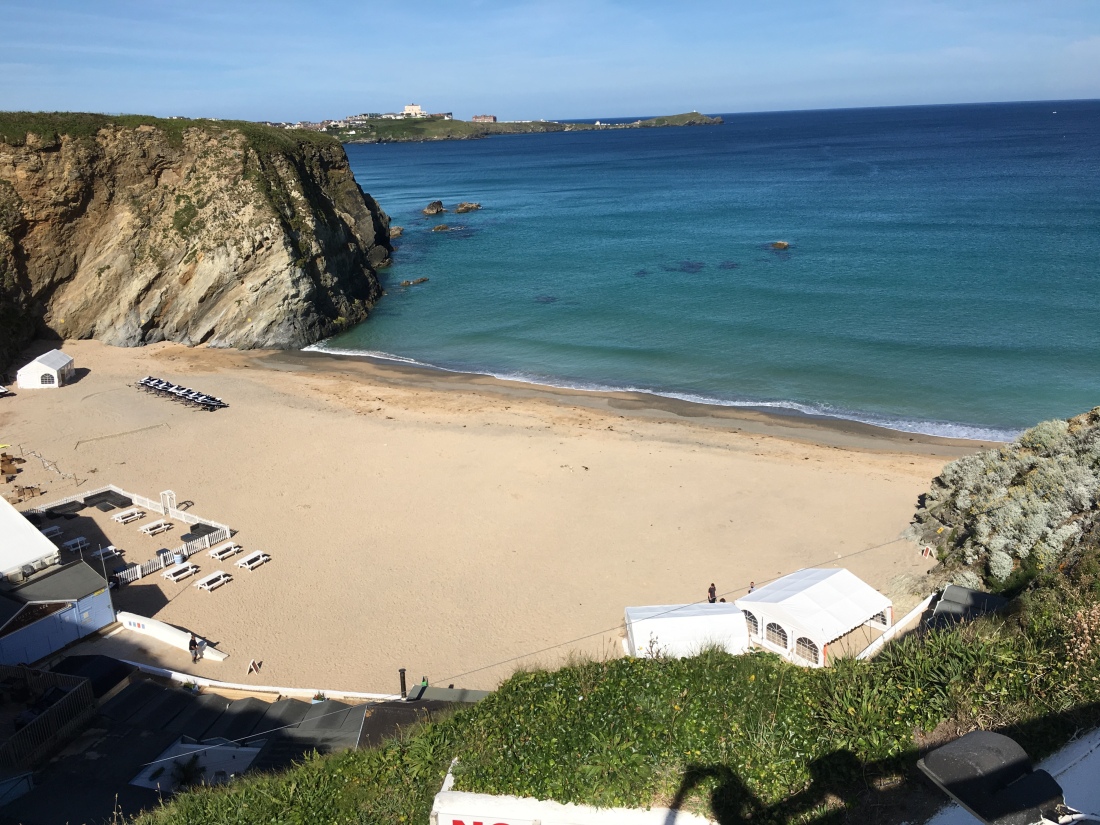 You can see the remains of fortifications. This has been excavated and there was evidence of a large round house that was probably a meeting chamber as well as smaller dwellings and evidence of arable fields.

From the sublime to the ridiculous. In the next field was a football crazy golf course

I then crossed clifftops above the beautiful Watergate Bay

The walking was much easier today. Most of the ascents were not steep and, once at the top of the cliff, the path tended to be fairly flat. Views were excellent, I could see back to St Ives and forward to Trevose Head. Unfortunately these appeared as smudges on the photographs.

Then a descent to another beautiful cove: Mawgan Porth 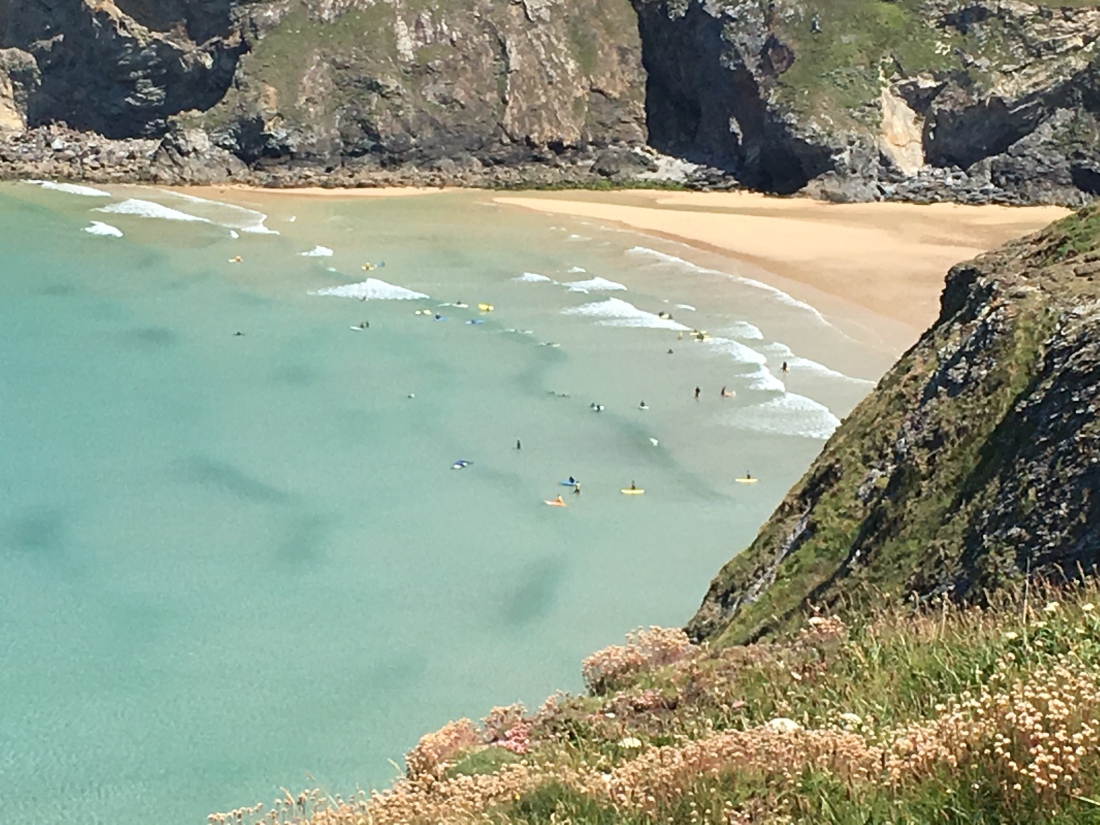 The North Cornish coast is a surfers paradise. However, Today they were grumbling as the sea was as flat as a millpond, although body boarders and paddle boarders were still giving it a go. I got an ear worm, Christy Moore’s “Delerium Tremens” the end of the chorus being:

(You probably need to be of a certain age to understand) 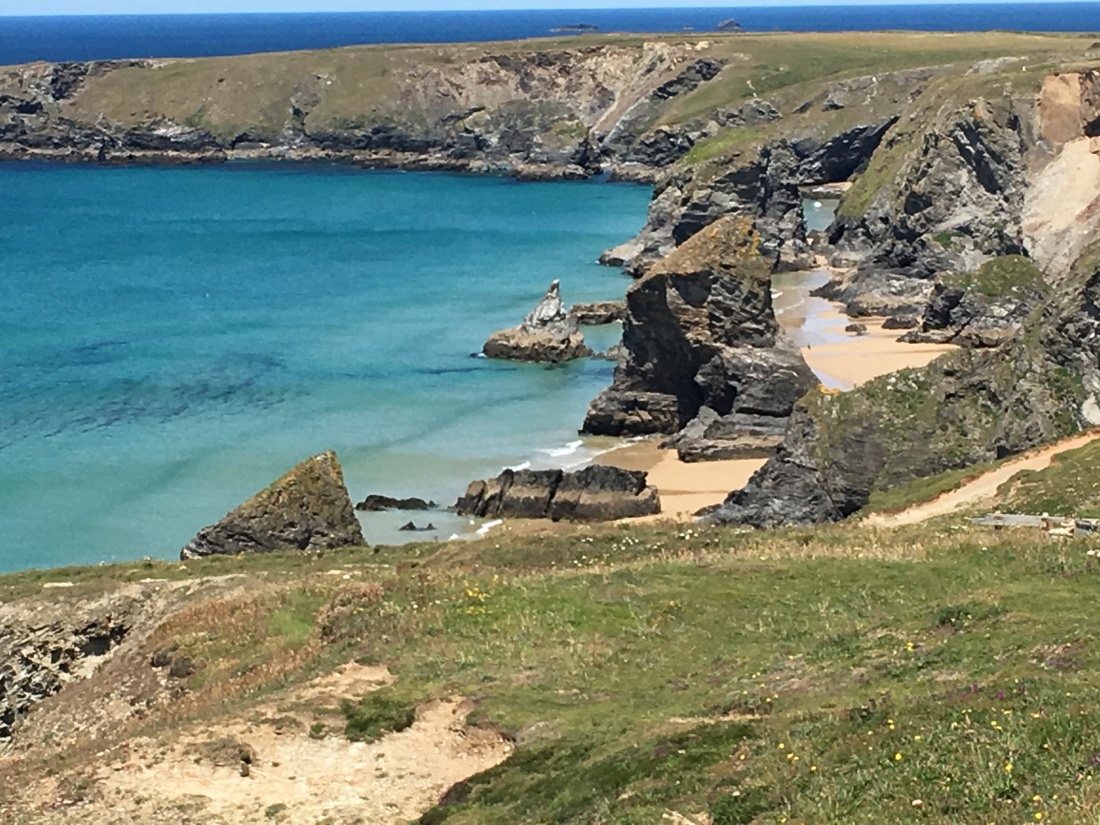 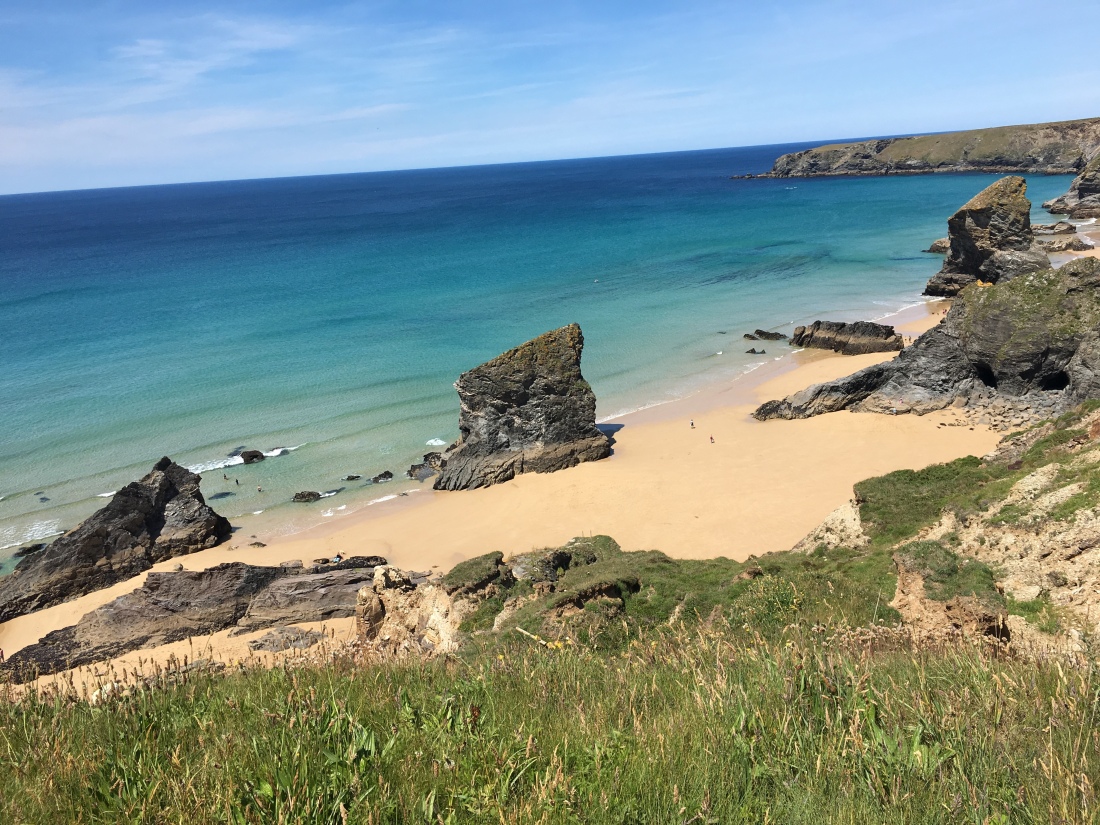 These rock stacks were put there by the giant Bedruthan so he could cross the bay at high tide. Unusually, he doesn’t appear to have eaten anyone.

This part of the coast was really beautiful. These islets are the Minnow islands.

I was getting tired and the muscles behind my left knee have been sore for the last few days so I reluctantly left the coast path and crossed inland to Trevone. There was a brief return to the coast path before arriving in Trevone 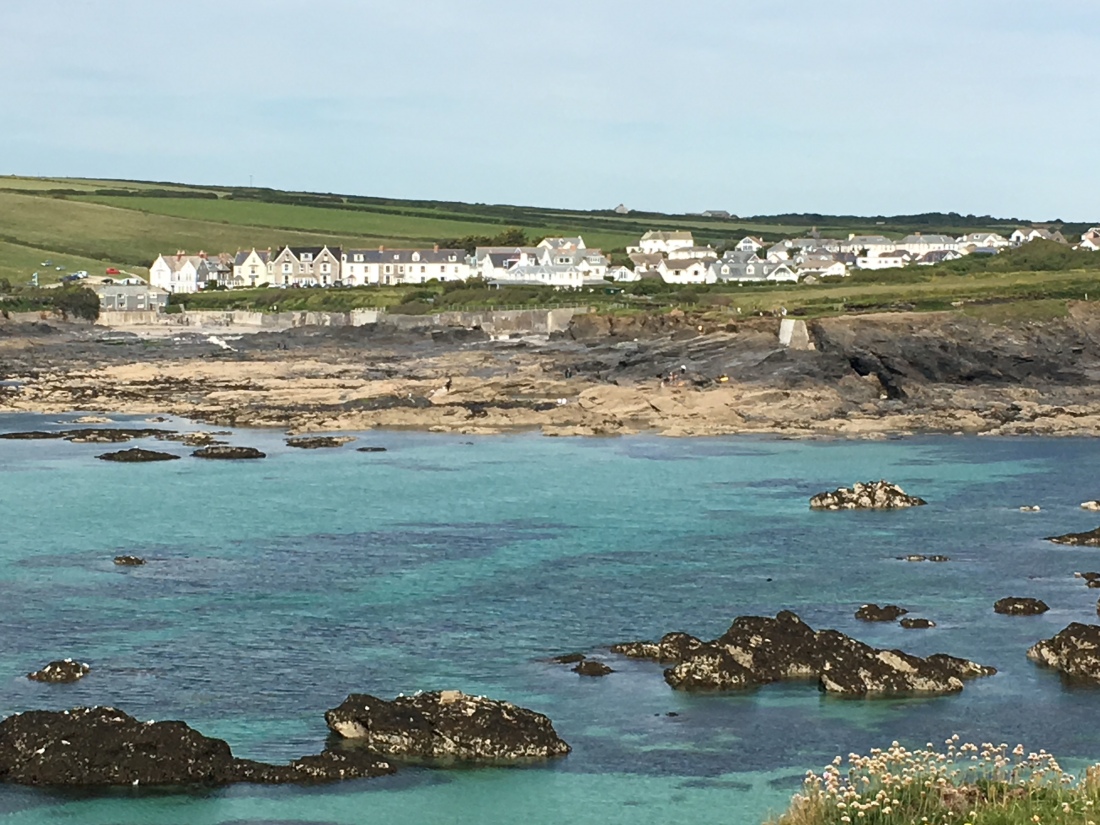 I would definitely recommend the Cornish section of the Coast path. I used the Cicerone guide. It describes the whole SW coast path, but in the opposite direction to the direction I walked. I didn’t take it with me but I found it very useful in planning and I annotated the map where I would find cafes and pubs so I only had to carry food one day. The official SW coast path web site is excellent

The odd facts come from the Cicerone guide, the National Trust web site, visitcornwall.com (the official tourist board), notice boards put up at some of the sites and by internet searching on the name of the site in question.

If you are visiting Cornwall and not walking, the Minack theatre is a must. Take a picnic or buy food there ( I had a very nice goat curry) but dress up warm.