I needed the rest day yesterday! Today was long. The rain had stopped by the time I woke up and by 9 the sun was coming out. I set off through St Ives, alongside Carbis Bay. The path passes between houses and the sea and I couldn’t see the contour lines. I got a shock how up and down it was.

Carbis Bay is on the Hayle estuary and, although it was low tide, I didn’t fancy trying to wade across the river. The path takes about a three mile detour along the estuary. Nice views to porth kidney sands and back to St Ives.

As I approached the church of St. Uny in Lelant I met a man walking the pilgrims route from the church to St Michaels Mount, the St Michael’s way. The path is one of a number of pilgrim routes across Europe that converge on St James’ cathedral in Santiago de Compostella in Galicia. Pilgrims from Ireland used to land here and walk across Cornwall because the waters around Lands End were considered too dangerous.

I can’t tell you much about Lelant saltings except it used to be a port until the harbour silted up and the author Rosamunde Pilcher was born here. When you cross the estuary there is an area that looks like it has been dug out into linear trenches but I do not know why. 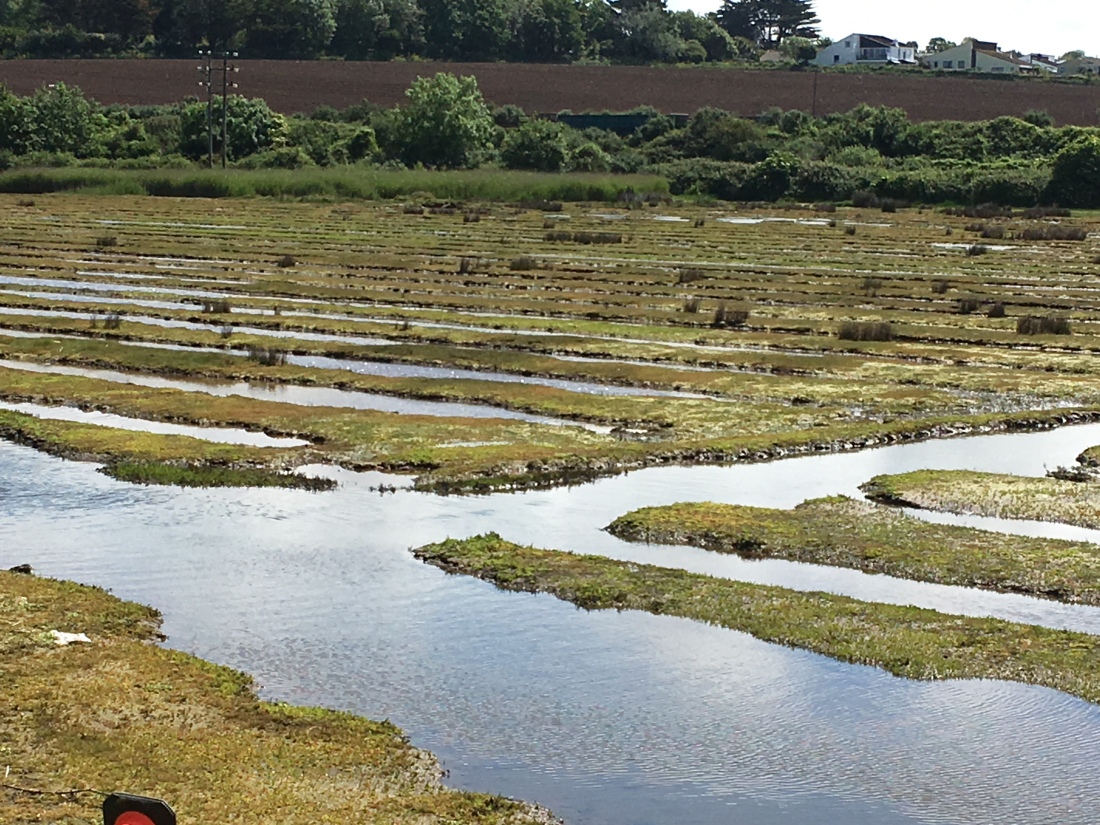 The path then crosses the Hayle and makes its way back to the coast. It then passes through dunes called the Towans, derived from a corruption of the Cornish for dunes. I followed the dunes for a short while and then descended to the beach. This was a beautiful walk around St Ives Bay, although some prefer to see it from the sky 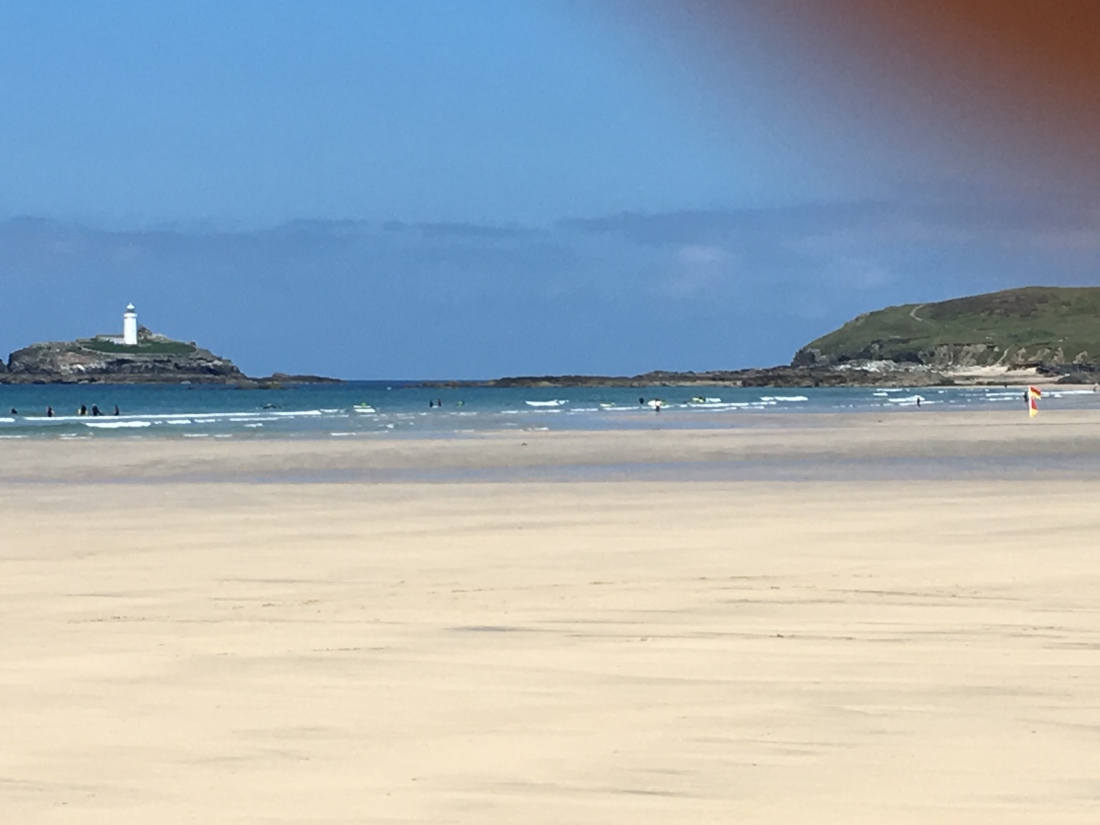 The first picture is a view of Godrevy Towans and Godrevy Island, the second a view back along the beach.

The path then takes to the cliffs again. Very easy walking with no steep ascents for most of the day. The nice thing about the path is there are always opportunities for a healthy lunch

That’s 2 of my 5 a day: white chocolate and raspberry. Why am I not getting thinner??

This is the lighthouse on Godrevy island

Easy walking along the cliff path with fine views back towards St Ives Bay and forward towards Portreath.

As you can see, nice and flat.There has been an abundance of lovely flowers throughout the walk. Examples: 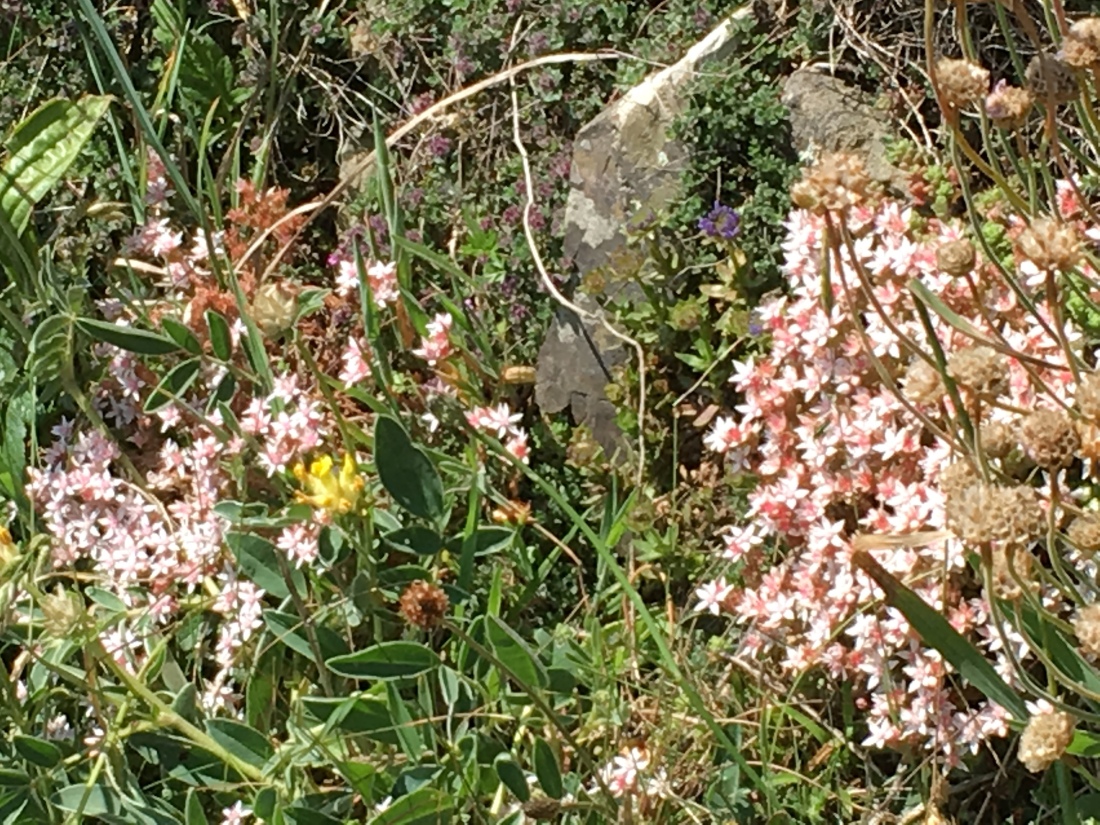 All flat paths come to an end and after an easy stroll there were two sharp descents and ascents.

The path then crosses the cliff above Ralph’s cupboard. This is a collapsed sea cave.

There is a legend that this was the home of the giant Wrath of Portreath. He would throw rocks at passing ships to wreck them. He would then eat the crew and steal their treasure. He wasn’t at home today. Other stories say it was used by (human) smugglers as a hideaway and to store their loot.

I feel bad I criticised the SW coast path signage a few days ago. Since then it has been perfect. I have got lazy navigating, I just need to keep the sea on my left. On many of the signs there is a grid reference so you can always work out where you are.

Also, where the path is overgrown somebody has cleared it with a strimmer. In some places the cliff has collapsed or is unstable and there is a clearly marked diversion.

Finally I turned the corner and arrived at Portreath